Several notable quotes come to mind for me about the Ohio Bureau of Workers’ Compensation [BWC]’s new rule regarding authorization of lumbar fusion surgery. They include:

"No good decision was ever made in a swivel chair."

"There is usually only a limited amount of damage that can be done by dull or stupid people. For creating a truly monumental disaster, you need people with high IQs."

And the classic attributed to Ronald Reagan:

“The most terrifying words in the English language are: I'm from the government and I'm here to help.”

The BWC’s Board of Directors approved a rule June 23, 2017 promoted by the former BWC Medical Director (a non-surgeon) and the Stakeholders Health Care Quality Assurance Advisory Committee. Labeled a “Common Sense Initiative” [never a good sign], the new procedure was sold as “being proposed to ensure the incorporation of best current clinical practices, injured workers’ awareness of treatment options, promote a two-month course of comprehensive conservative care, and to provide criteria for consideration of lumbar fusion surgery.”

To paraphrase J. P. Morgan, a governmental agency always has two reasons for anything promoted as “common sense” reform: a good reason and the real reason.

In a time where medical cost containment is king (recall that the BWC abdicated much of its responsibility to approve or deny requests for medical treatment years ago to Managed Care Organizations, or “MCOs", whose goal is to reduce medical expenses in claims), the BWC’s public pronouncement this rule was enacted because it cares about injured workers rings hollow. The nanny state’s interference with the doctor-patient relationship is all about the money. 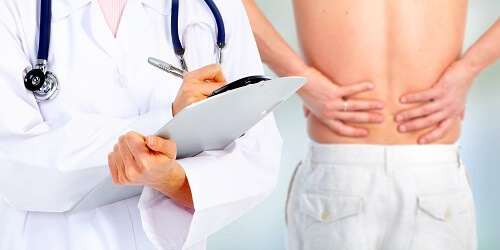 While the BWC uses a thin layer of “we all just care so much about injured workers and want to make sure they aren’t being taken advantage of by those greedy surgeons” to justify the long list of preconditions both injured workers and surgeons must meet to obtain approval of lumbar fusion surgery, the reality is the hoops both must jump through to meet the administrative requirements will leave many people in extended pain while they wait to undergo the procedure their surgeon believes will provide relief. After all the other required conservative measures have been exhausted (which alone must take at least 60 days), workers must undergo two consultations prior to surgery. As hearings will likely be required to obtain approval for these consultations, the approval process for surgery will be delayed by months. While waiting, workers with lower back injuries must suffer, be out of work and live on pain medications.

Workers and surgeons are then required to sign a BWC form entitled “What is expected of you if you proceed to have lumbar fusion surgery”, attesting that they have read the Bureau handout “What BWC Wants You to Know About Lumbar Fusion Surgery”. What normal person wouldn’t be hesitant to proceed with surgery of any sort by these titles alone? Do I trust my surgeon (as President Obama warned us, unethical and greedy doctors may decide to perform surgery merely because their reimbursement is higher) or the benevolent State of Ohio? I mean, I’m sure the State is looking out for me… doesn’t BWC mean “Because We Care”?

The BWC has provided no statistics to back up its unstated assertion that doctors rush into performing surgery without first implementing conservative treatment measures such as physical therapy, steroid injections and acupuncture. In my experience, doctors have often been criticized by defense attorneys and the BWC for utilizing such measures rather than pursuing surgery earlier, the assertion being “the doctor is just milking the claim, running up costs and keeping the injured worker off the job!” As though doctors don’t already detest dealing with the BWC, now they are essentially accused of looking out for themselves first, not their patients. I guess if you’re a doctor, you’re “damned if you do and damned if you don’t.”

Worse, the rule has a chilling effect on many surgeons. I’ve heard anecdotal evidence from colleagues who’ve been contacted by surgeons whose malpractice carriers have advised them not to sign the BWC form as it essentially admits fault even by performing the fusion! Who can blame a doctor for refusing to sign a form indicating the surgery they are about to perform likely won’t work?

MCOs have been advised to deny C9s requesting authorization for lumbar fusion surgery rather than dismiss them when the stringent criteria are not met. This will at least, ultimately, permit the issue to go before an Industrial Commission hearing officer. Remember this is a BWC rule. The Industrial Commission can, but is not required to, follow BWC policies and rules. While this argument won’t work in every case (and never with some hearing officers), it’s at least a ray of hope for those truly in need.

You can’t convince me this rule is good for anyone.