There are hundreds of ways to be injured at work. You could slip and fall, develop a repetitive-motion injury, strain your back lifting a load, have a mishap with a tool or equipment—you name it, we have seen it. One cause of injury that people don’t often think about is assault. What happens if you are attacked at work—either by a co-worker or a non-employee? Can you get workers’ comp for that? Depending on the situation, yes—injuries caused by a physical assault are compensable.

Assault Injuries Follow the Same Standards as Other Injuries 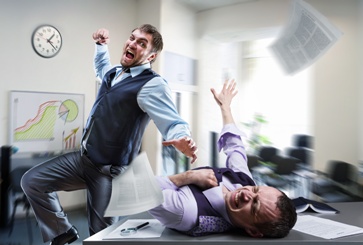 To receive workers’ compensation benefits for an injury in Ohio, an employee must establish that the injury happened in the course of and arising out of his/her employment; both requirements must be met. Specifically, in cases involving fights and assaults at the place of employment, Ohio courts have consistently focused on two factors: (1) The origin of the assault was work-related, and (2) The claimant was not the instigator. The injury is compensable only if both findings are made.

The best way to explain which kinds of workplace altercations are compensable is with examples. Real-life cases similar to these scenarios have been determined to be compensable by Ohio courts:

Frank should be eligible for injury compensation in all these situations. His widow in the last example should have a legitimate claim for death benefits. The arguments and resulting assaults in these cases arose from work-related activities in the course of employment. Note that, had Frank thrown the first punch in these scenarios, his claims would have been denied as he would have been considered the instigator.

Assault Claims That Are More Difficult to Prove

The timing and location of the assault have also been significant in Ohio workers’ comp decisions. To use poor Frank as an example again, consider the following scenario: While working at the Goodyear Tire plant in Logan, Frank was approached by his supervisor, who asked whether co-worker Joe had left work early the previous day. As the plant had been experiencing attendance problems and believing it was his duty to answer truthfully, Frank told his supervisor that Joe had been leaving work early. A week later, Joe assaulted Frank at a local restaurant. In a similar real case, the Ohio Supreme Court held that the claimant’s very serious injuries were not sustained in the course of his employment, nor did they arise out of his employment. A well-reasoned dissent argued that the injuries were compensable.

What If There Is a Personal Element to the Fight?

Injured in an Assault at Work? You Need an Experienced Lawyer

As you can see, there are gray areas with assault claims, and you will need legal help arguing your case if you were hurt in a fight at work. The team at Monast Law Office will listen to your story and tell you if it is worth pursuing as a workers’ comp claim. We will not waste your time by giving you false hope, but if we think you have a claim, we will build a strong case on your behalf. If you want to learn more about workers’ comp claims in Ohio, please download our free book, The Workers’ Guide to Injury Compensation in Ohio, and give our office a call. If you suffered an unprovoked attack while doing your job, you should not have to shoulder the burden of medical expenses and lost wages. Contact my office for help.