Horseplay at Work? Are You Covered Under Workers’ Compensation? 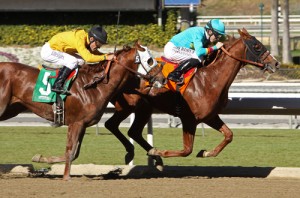 The Kentucky Derby was run this past weekend and the Preakness and Belmont stakes are just around the corner. Plus, spring seems finally to have sprung from this past brutal-and nearly endless Ohio winter. In spring, people and colts can get frisky!

Horseplay in the paddock and in the field can be fun to watch. Horseplay at work is usually harmless and often fun but not when, as mom used to say, “somebody’s gonna end up getting hurt!” I’m thankful some of the fooling around I did on some of my first jobs didn’t result in injuries as they may not have been covered under workers’ compensation—and could’ve gotten me fired.

The New Oxford American Dictionary defines “horseplay” as rough, boisterous play. It’s also called fooling around, shenanigans and monkey business. Injuries that occur during such roughhousing are compensable if the claimant was not the instigator but are not compensable if the claimant was the instigator. Compensability for injury suffered by the non-instigator have long been recognized in Ohio under the theory that horseplay results from associations and conditions inseparable from factory life.

What do the courts have to say?

The Wall Street Journal recently reported on the case of a young maintenance worker for an Atlanta-based railway service company who was goofing around with his work buddies at a rail yard one evening when the group tested out a potato cannon they has assembled from spare parts. Instead of firing, the three-foot pipe device—packed with metal scraps and gunpowder instead of spuds—blew up and sent shrapnel flying through the air. The maintenance worker, who was perched on a nearby fire escape recording the footage with his phone, was struck across the skull. He sued his now former employer in Georgia court in 2012, claiming the company should have to pay damages for the brain injury he suffered in the mishap.

A trial court dismissed his case but, in March, 2014, a state appeals court overruled the decision, allowing pursuit of the claim under the theory that an employer can be held responsible for an action taken by an employee that causes intentional harm to others. The appellate court concluded that the company failed to maintain a safe work place and that supervisors at the rail yard ought to have ordered the workers to stop horsing around with the potato gun and leave the site. His employer has appealed to the Georgia Supreme Court.

Obviously, the outcome in horseplay cases is fact specific. It’s best to remember that, while all work and no play may make Johnny a dull boy, it’s likely that Johnny is less apt to get injured if he keeps his mind on his work while at work—and not on pranks and hijinks.