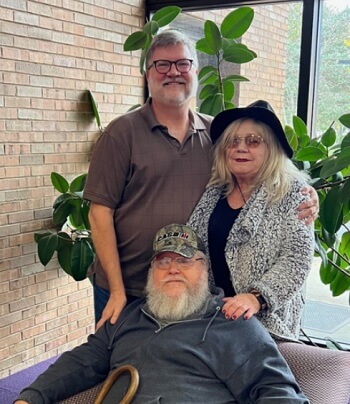 Our dear friend, Kathy, has been a client for over 20 years. She was born and raised in Amlin, Ohio (much of which was annexed by Dublin a few years ago), and still lives there. She’s been married to Rick for 51 years. They raised four girls and are blessed with five grandkids and two great-grandchildren!

A graduate of Hilliard High School, Kathy worked for and was injured at Rage Corporation in Hilliard. Rage manufactures plastic containers and components. She injured her back moving boxes of plastic forms, feeling a pop and displacing a lower lumbar disc. The injury happened on a Sunday. She saw her doctor the next day and has been unable to work since.

Her doctors initially tried physical therapy, water therapy, and pain management. These didn’t help the low back pain that radiated down both legs. So, she then underwent an anterior lumbar fusion, which made things worse!

Having always been active raising her family and gardening, she had to limit her normal routine significantly. Rick and the girls help with chores, shopping, and doctor appointments.

During visits with one of her doctors (who has since retired), she met another “famous” Amlin resident: my dad, Joe! Now, my dad (who had also injured his back working a retirement gig at Walmart) “never met a stranger,” having been in sales all his life. He was also loud and liked to stir things up, even at his doctor’s office visits. (His headstone is inscribed, at his request, with “still running my mouth!”) Kathy would always ask about him when we’d talk on the phone or have hearings ... occasionally, she’d share with me some of his antics at the doctor’s office.

We recently helped her receive permanent disability benefits, which will help pay the bills.

She has experienced a lot of difficult times since her injury, including losing a daughter recently. But here’s the thing: The first thing she does whenever we talk is ask how others are doing! She is one of the kindest souls I’ve met. She doesn’t dwell on the negatives and tries to stay positive through the pains of injury and life. She’s just a treat to know, and we are very fond of her.