Charlie's Injury Prevented Him Returning to His Newspaper Job

Mark Twain reportedly said, “So I became a newspaperman. I hated to do it but I couldn’t find honest employment.”

Mr. Clemens’ beliefs aside, for others, the printers’ ink just seems to run in their blood as it clearly has for Charlie’s family. 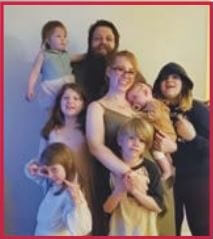 We’ve represented Charlie since his injury at “Ohio’s Greatest Home Newspaper,” the Columbus Dispatch, several years ago. The Dispatch began printing in 1871. Since then, it’s seen its fair share of Charlie’s relatives work there. As Charlie explains it:

“As a kid, I remember my dad coming home in the wee hours of the morning to give us kids a hug and a kiss goodnight. He always smelled of Stetson, ink, and paper, the smells of the Dispatch. I kinda grew up in there: Everyone knew everyone, and it was a close-knit group. My grandfather, Charlie, started at the Dispatch in April 1934, followed by my father Richard in the early ’70s. They were both journeyman mechanics, well respected in their trade, and I wanted that. My brother and I both applied, but limited positions were available. My brother was hired on. Fast forward a couple years, I was hired part-time, working on and off for 3 years, then finally had the opportunity to go full-time. To say I was excited was an understatement! The only job I had ever wanted since I was a kid was finally mine — I even wrote a report in school about how I wanted to be a journeyman! At the time of my injury, I had worked up to a nightside lead position and was the nightside union chairman for the Teamsters Local 473.”

Charlie even met his wife, Lorena, at work when he was a forklift operator and she was a wave processor. They’ve been together 14 years and have six great kiddos.

Charlie injured his back trying to move a pallet using a pole as a lever, a common practice. Following several years of therapy, injections, and rehabilitation, even the Bureau of Workers’ Compensation’s doctors have concluded Charlie can’t return to his job. While a fusion may be in his future, and his activity level is severely restricted, he remains upbeat. He is married to his best friend, has a wonderful family and a fantastic legal team, and rocks a righteous beard!!

We are pleased to introduce you to the Schmidts, our friends and a delightful family with longstanding ties to Central Ohio.