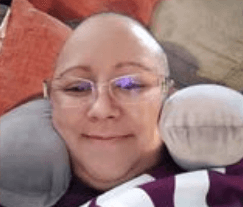 Born in Norfolk, Virginia, Brenda’s dad served in the Navy. The family moved often and settled in Dayton, Ohio, after her grandfather died and her grandmother wasn’t doing well. Brenda grew up and raised her own family of five in Dayton (she now has five grandchildren, too). She loves attending the kiddos’ sporting events, fishing, and other activities.

She moved to Columbus, Ohio, and began working as a picker at a fulfillment center for one of the world’s largest employers. (Fun fact: This company was founded by a bald guy who looks a lot like a bad James Bond villain, but he retired from the company last year and now spends his time rocketing into space, hanging out with movie stars, and sailing on his yacht!)

Brenda had some foot problems in her youth, but after surgery, she did fine for years … until lifting a large box mattress from overhead to fulfill a customer order. It slid down along her body, striking her right lower leg, foot, and ankle.

She visited doctors the company had sent her to, but she didn’t improve. After undergoing all of the normal tests and treatments for tendinitis — and a torn ankle tendon — her instability and pain worsened. Even during surgery, she developed complications: internal bleeding that required three blood transfusions! The doctors told her she nearly didn’t make it, but by golly, she did. Still, her problems lingered. The doctors ruled out deep vein thrombosis (DVT), and her orthopedic surgeon suspected she had developed complex regional pain syndrome, a very painful condition I’ve written about before.

Her employer fought her tooth and nail over the complex regional pain syndrome (CRPS) and the depression that typically comes with it. While this happened, Brenda began experiencing terrible headaches. Her doctor did a brain scan and … found a mass on her brain that required urgent surgery to remove.

Brenda is rocking a new, much shorter hairdo now since her brain surgery. Had she not been seeing a doctor anyway, because of her ankle problems, she may not have addressed her headache symptoms. It’s surreal to think the scans wouldn’t have been done that helped doctors discover the mass in time.

Brenda recently agreed to settle her claim with the Bond-villain company so she can focus on recovering from her brain surgery. As is obvious from her pictures, she’s still an upbeat, happy camper … with just a tad less hair to mess with for now! She’s such an inspiration.