Our client, Erica P., is a flight attendant for a regional airline based in the Port Columbus airport. She is a bundle of energy, chipper and irrepressible. It’s obvious she’s in a job she loves and it’s a great fit for her!

She needed help from a workers' comp lawyer with her claim, as her employer has been fighting it tooth and nail. It’s not that they dispute she got hurt but … well, let me explain.

I learned a lot about airlines working with Erica on her case. For example, flight crews operate by report times and release times. A “report” time is the time the company tells them to be at the airport to report for duty on airport property. This is the start of their trip, or “pairing.” The trip or “release” time ends upon the arrival to the originating base airport. Columbus is Erica’s home base airport. Between report and release time, she and the crew are considered “on the clock.”

Crew members are paid during flight time but also receive a per diem of $2 per hour continually from report time to release time of a trip. This includes trips where they must stay overnight and fly out again the next morning. The airline designates, books, and pays for their lodging. Crew members don’t choose where they stay and must move together as a unit. At any time, an individual crew member can be reassigned to another “pairing” if a need arises elsewhere in the country.

Erica was awakened during one of her overnights by the bright light of a bedside alarm clock. She fell when she tried adjusting it, cracked her head on the nightstand, and got knocked out. The airline didn’t dispute she suffered a concussion and other injuries (likely a herniated disc, too) but didn’t think they should have to cover her claim.

In Ohio, if someone is designated a “traveling employee,” they are covered by workers’ compensation for the entire time they are pursuing the employer’s business, unless they are on a “personal errand” (such as heading out to a bar across town). The airline argued Erica should be treated like a truck driver. Because truckers have to take a rest period mandated by the Department of Transportation, their employers can’t pull them from their layovers to work. Courts distinguish a trucker’s “slip and fall” during such times from injuries to traveling employees such as salespeople and, well, Erica! 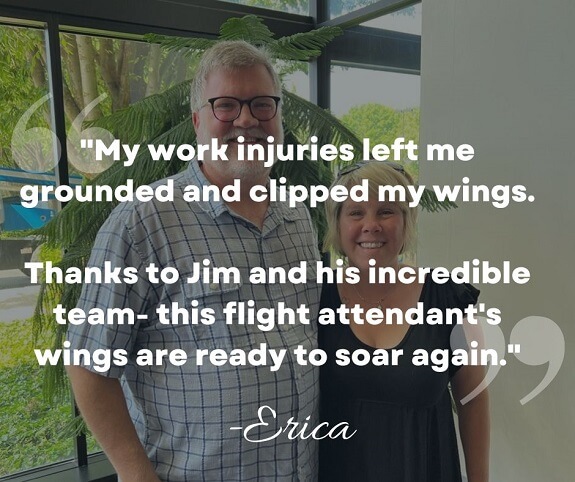 We’ve won her hearings administratively and gotten her claim allowed, but, as many of you know, the process has delayed her treatment and testing. And she just wants to get back to work. As Erica says,

“I am always asked what I love most about my job. Most think it’s people or the travel benefits. Actually, I love the unpredictability! Nothing is ever the same! Weather delays, maintenance, crew changes, reassignment, etc. I love that my job is never the same, day to day. I love that I can be independent and use my charismatic personality to engage the public. I love that in 90 seconds, I can evacuate a whole plane to safety I miss my job and I cannot wait to return to what I love. When the skies are calling, you can never stay grounded!”