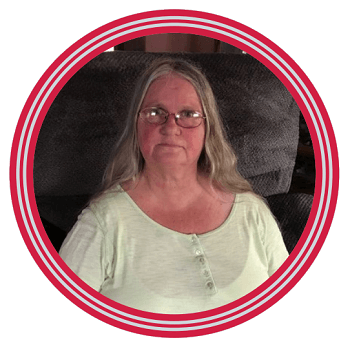 We all know those folks who just keep on going when the going gets tough and refuse to let life’s trials keep them down. There’s an old Scottish ballad by Sir Andrew Barton that goes:

“Fight on, my men. I am hurt, but I am not slain; I’ll lay me down and bleed awhile. And then I’ll rise and fight again.”

We have lots of clients like this, and they are an inspiration. Life can be hard even in the best of times. But, it’s in the hard times we find out what we’re made of.

Cathy is one of those folks who just keeps going. Only a few years after graduating high school, she became supervisor of housekeeping at Essex of Springfield. Essex is a skilled nursing facility, so the demands on those who keep it clean and tidy are high. Cathy ran the show over there for 30 years.

In 2008, she added a part-time gig at Springfield Antique Show & Flea Market, keeping the place cleaned up. Those familiar with the market know it’s big. In fact, it’s large enough that Cathy had a golf cart to ride from one end to the other. One day, while riding as a passenger on the back of the cart, she fell out, hitting her head on the concrete, bouncing three times, and fracturing her skull. Knocked unconscious, she went to the ER in Springfield and was then transferred to OSU’s head trauma department, where they treated Cathy for internal bleeding and seizures.

She required extensive speech therapy as well as learning how to adjust to short- and long-term memory issues. She had to stop driving and cooking unless supervised.

Not surprisingly, in spite of all the rehab efforts, Cathy was granted permanent total disability by the Industrial Commission. But, here’s how that story ties in to my statement about people who just keep on going!

Wilma called Cathy recently to wish her a happy birthday. Cathy said she doesn’t sleep well and is up a lot. The two fans in her bedroom just weren’t cooling things down enough, so she decided at 2 a.m., by herself, to install a window air conditioner!

Wilma said, “No, you did not!” And Cathy said, “Oh, yes, I did!” While most people are sleeping, Ms. Cathy became an instant AC installer!