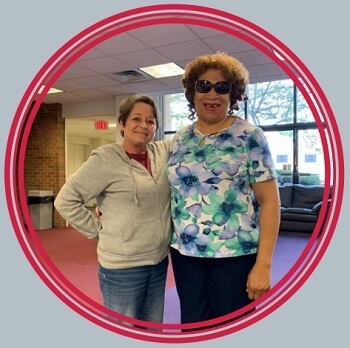 Juanita W. is one of our favorite folks. We’ve known her and her husband, Willie, for years. Miss Juanita, as she’s known around here, raised her family before working construction for many years at places such as Walsh, Shelly Sands, Kokosing, Kirk Williams, and P.J. Dick. Besides manual work, she drove Bobcats and used sandblasters and power washers. In May 2008, at age 62, she was part of the cement contracting crew that was rebuilding the student union building at Ohio State University when she stepped in a hole while shoveling mud out of a trench and twisted her left knee. She followed up with an emergency room visit and went back to work even though she was experiencing increasing discomfort. Two months later, she fell four feet off a scaffold, dislocating her right patellofemoral joint.

Within three months, her doctors were recommending a right knee replacement. She opted instead for therapy, injections, medication, and a cane that eventually gave way to a walker. Miss Juanita tried to remain active and always kept a positive attitude, knowing God is in control of her life. An attempt at rehabilitation was derailed by the Bureau of Workers’ Compensation (BWC) two years later when they found they couldn’t help return her to work. The company’s doctor said she’d need permanent restrictions: no kneeling, squatting, crawling; or climbing stairs, ladders, or scaffolding. He also said she could walk for personal needs only (bathroom, breaks, and meals). The Industrial Commission awarded her permanent total disability in 2011. Since then, while she’s relied more on Willie’s help to do many things she no longer can, the two of them have remained active in their church and are an encouragement to many who’ve also experienced hard times. They are a wonderful example of love for each other and of a couple who keep their heads up when life gets tough.