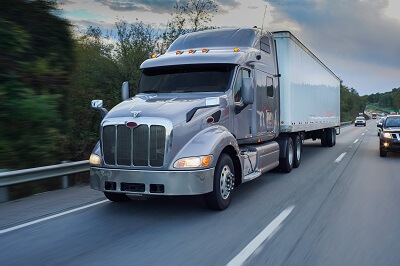 I’ve mentioned before there have been a lot of truck drivers in my family. My brothers Bryce and Allen drove first for the moving company Mayflower Transit and then for Tri-State Trucking out of Joplin, Missouri, when I was little my uncle Nick had his own small trucking operation out of Iowa for many years, until memories of a horrendous accident led him to retire.

Bryce gave it up when it got too hard to balance marriage and family with weeks on the road. After he retired from Whirlpool, though, he went back to driving for a few years and even taught newbies how to handle the big rigs … for some guys, it just seems to get in their blood. My eyes got big when he’d talk about hauling dynamite through the Rockies or moving a Saturn V rocket engine to Cape Kennedy!

When I was a toddler, my parents often had to load me in the car to see “the big trucks” on Range Line Road in Joplin before I’d go to sleep.

It used to be a good paying job and the drivers were highly trained professionals, courteous, and safe on the roads. Now, it’s still a hard job but doesn’t seem to pay as well.

One guy who drove in the glory days is Carl S. After leaving high school early and serving three tours in Vietnam as a machine gunner, he learned to drive semis. While he did a couple other side gigs over the years, he could never leave the smell of diesel and the sound of air horns for long. After 28 years and millions of miles without an accident, he got into a doozy when he plowed into another rig stopped on I-71 in Kentucky. He lacerated his spleen, broke his leg, busted his teeth, and bashed his head. He was off work for 16 months. After extensive rehab, he tried to go back to training new drivers. Getting in and out of the trucks was too much, as his leg would give way without warning; he didn’t feel safe. He then tried working security but the lingering head injury resulted in memory and concentration problems. Reluctantly, he listened to his doctor, who advised him to file for permanent total disability.

As is often the case, though, the Industrial Commission doctors agreed that Carl couldn’t sit, stand, climb stairs, squat, concentrate, or remember short instructions, but they still concluded he should be able to do something(maybe become a politician!). When we got to the hearing, however, a long serving Industrial Commission hearing officer agreed this was a pipe dream. Over the objections of the Bureau of Workers’ Compensation attorney, the hearing officer granted Carl’s permanent total disability.

I’m always honored to help these truck drivers who face debilitating injuries on the job. I suppose it takes me back to a simpler time, years ago, when a little boy riding in the back seat of his parents’ car would look up at the driver of a Peterbilt or Kenworth (or the guys “chasin’ the bulldog” in their Macks) and motion for him to blow that big ol’ airhorn. He’d smile and oblige, much as if saying, “That’s a big 10-4, little buddy!”