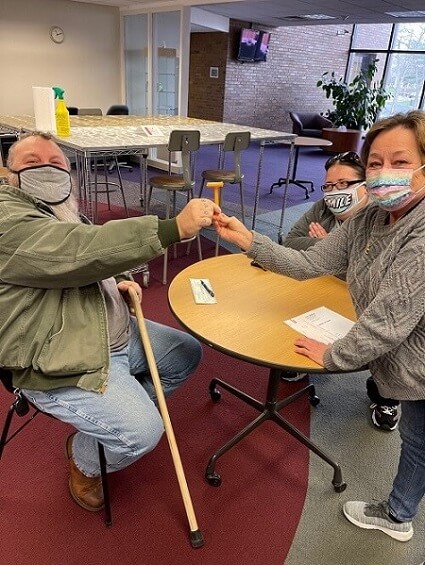 Our client and friend, Shawn, got hurt nearly twenty years ago at age 26. He was working at KTH in Saint Paris, putting parts in a basket, when he herniated two discs injuring his back.

Over the years, he’d have surgeries and go back to work, followed by more extensive surgeries and another return to work. Meanwhile, he’d actively get treatment when we could get it approved but the treatment was so delayed by litigation, it probably never worked as well as it could have had he been able to get it when his doctors requested it. We’ve attended more hearings together than either of us can remember as certain employers spend much more on fighting their employees and paying their lawyers than agreeing to permit treatment that would help him, and them, by keeping him working.

He and his wife Brandi had their two daughters since Shawn’s injury. They’d bring the girls to hearings as infants and I’ve watched them grow into lovely young women since this all started.

After his most recent operation in early 2018, performed by the head of surgery at Riverside in Columbus, Shawn was actively participating in physical therapy when his disc herniation recurred. This is not uncommon and sometimes happens months or years after surgery. Ohio courts have recognized that subsequent herniations or meniscal tears, etc., stemming from the previously-weakened back or knee, can be recognized as part of the original injury, even if the subsequent event doesn’t happen at work. His employer fought the recurrence tooth and nail, and the depression that frequently accompanies a debilitating injury.

Shawn’s situation is one of those proving that even the best supported case, legally and factually, may fall on deaf ears at the Industrial Commission. There are factors that make this more likely but, bottom line, life happens. After a half-dozen hearings and all sorts of procedural snafus during the hearing process, we found ourselves pursuing the matter into Common Pleas Court. Ultimately, we suggested mediation and resolved the issues to Shawn’s satisfaction. Still, some situations just gnaw at me and his is one. Things just didn’t work out as they should have in my vision of a perfect world!

Shawn and Brandi stopped by the office recently. Shawn and Wilma (and Brandi) have teased each other a lot over the years, and one topic has been Shawn’s ever-lengthening beard. Wilma has told him for months she was gonna get him a razor and shave that thing off! When he and Brandi came in, Wilma presented him with a razor (supplied by our own Todd). Shawn laughed and said “I think I need a weed-whacker!” Indeed he would!

We are grateful for our friends. Having been through so much together in twenty years, they are more than clients to us. Shawn says when the weather warms up and he feels better, he wants to go with me to hearings and carry my files. I told him I could tell the hearing officers “This man is exhibit ‘A’!” Ha!

Shawn has remained upbeat and grateful despite his injuries and the frustration of dealing with employer attorneys and hearings. Our lives are better for knowing them.