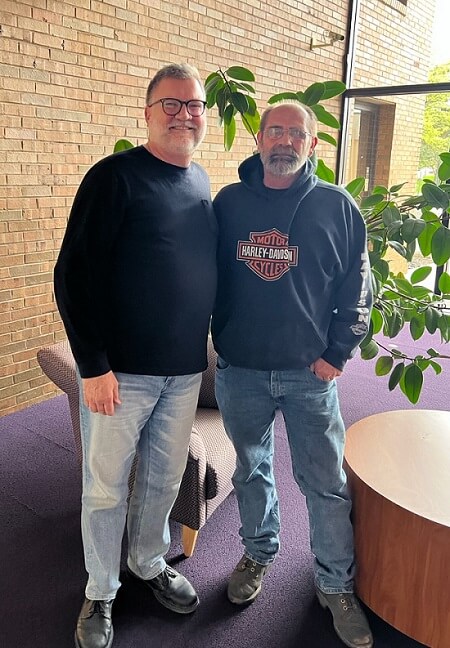 We’ve been doing some masonry work around our home this spring and summer. Talk about dusty, heavy, skilled work! Stone masons are craftsmen and a tough breed, for sure.

Our long-time client, Jerry, began masonry work out of high school in Columbus. Over his 30+ years as a mason, he routinely lifted stones weighing 100 pounds and more. He herniated three discs in his neck in 2002 but returned to work after treatment.

He continued to work until picking up an 80-pound piece of limestone Thanksgiving week, 2015, resulting in two herniated discs in his low back. After that, he never returned.

The disc herniations compressed the nerves in his low back, resulting in severe burning pain, numbness, and loss of motor function. A laminectomy was the first step. He felt better for about three days but then the pain returned. He had injections but no better, so he underwent a 2-level fusion three years after his initial injury. Because of permanent nerve damage, he was left with a drop foot which caused him to fall and tear his biceps tendon off its connection point with the elbow.

Understandably, going from a rugged, strenuous line of work to a point where he has trouble even getting his boots on, driving, and doing things around the house, Jerry became depressed. Fortunately, we got treatment for depression approved under his claim so Jerry could better come to terms with his limitations.

The BWC’s vocational people concluded Jerry was unemployable as did the Industrial Commission doctors.

Jerry recently settled his workers' comp claim and moved to Florida as the heat is much better for his back. We’ll miss our friend and wish him the best!