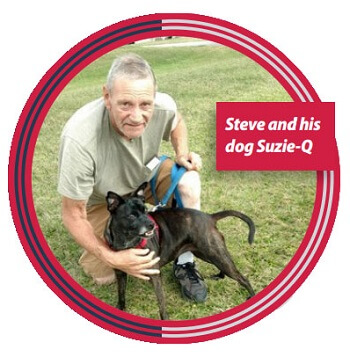 I admire Mike Rowe. I suspect most of us learned about him through “Dirty Jobs,” where he’d highlight folks who do work a lot of us wouldn’t want to do or that we don’t even think about. Sewage cleaners, disaster clean-up peeps, bug exterminators — yuck. Through the mikeroweWORKS foundation, which facilitates granting millions of dollars in work ethic scholarships, Rowe continues to extol the virtue of hard work and using your body, hands, and brain to build, shape, and beautify.

I learned a few basic home-improvement skills from my dad and my father-in-law, but my capabilities compared to my client Steve’s are like a little leaguer to Derek Jeter ... not in the same ballpark.

Steve Blanton is a plasterer by trade and experience. I’ve done some drywalling in my day, but Steve is an artisan. School wasn’t easy for him, but he knew he could work with his hands. He left high school in Mt. Vernon after 10th grade (later completing his GED) and became a plasterer’s apprentice. He later became a journeyman, and over 25 years, he’d seen it all: high rises and homes, residential and commercial, ceilings, walls, and fine decorative work. There’s a real skill to plaster work, and Steve was good at it — and he earned a good living for himself and his family.

To work on ceilings like Michelangelo, scissor trucks are often a must. But like all machines (and people), sometimes they get temperamental. Steve fought with one that stuck, and it won. He wrenched his back, herniating a lower lumbar disc. He returned to work after a month but continued with therapy and epidural steroid injections. His job duties, including carrying heavy loads of plaster and drywall mud, didn’t let up. His pain worsened. The spine surgery didn’t help either, nor did more epidurals, therapy, trigger-point injections, or heavy-duty pain meds.

With constant pain levels of 8 out of 10, loss of motion in his back, and weakness in his legs, Steven couldn’t do the only work he’d ever done. We filed for permanent total disability (PTD). Although the Industrial Commission’s doctor said he could do a sit-down job, the vocational folks said it was unrealistic to attempt retraining to do less physical work.

PTD was granted, so at least future income isn’t an issue. Still, Steve misses his work. The willingness to get dirty has always defined both him and us as a nation. It’s a hallmark of hard work and a hallmark of fun. Dirt is not the enemy. I admire guys like Steve who build things; it’s a skill set that doesn’t come easy, at least not for me.

As Mike Rowe says, “We don’t need American Idols. We need American icons. Icons of work.” In other words, we need guys like Steve.