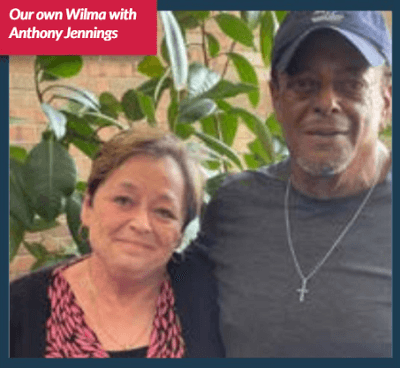 So, our friend and longtime client, Anthony, used to find himself in the dumps quite a bit … dump truck, that is!

Oh, I crack myself up with the dad-joke humor! Actually, Anthony got cracked up, too — but there I go again!

Anthony grew up in Columbus and went to West High School. He dropped out after 10th grade to help support his family, then he got a job driving a garbage truck at the age of 16. At 17, he drove a dump truck, hauled asphalt, and then moved to tractor-trailers at 19. Now, he has driven everywhere in the continental United States except for California.

His work has always involved heavy equipment and machinery, driving semis and paving trucks, hauling heavy equipment, using air tools/hammers, and doing auto/truck repairs. In the last six years of his work life, he drove heavy dump trucks (the ones with semis) for a demolition, hauling, and removal company. When these trucks dump their loads, they drive onto a ramp that elevates. Anthony was a passenger, working with a newer driver who didn’t get the rig centered on the ramp. So, when it tilted, the entire tractor-trailer rolled onto its side.

Anthony suffered severe work injuries in a garbage truck accident to his left shoulder, which required many surgeries that were followed by nerve blocks. Despite treatment, including lots of pain medication, he continues to have debilitating pain in his left shoulder that is aggravated by nearly any activity. While initially hospitalized, he also developed chronic respiratory bronchitis that has left him unable to tolerate diesel fumes or dusty environments.

Unable to return to the only work he’s ever done, Anthony tried a couple of stints in vocational rehabilitation to no avail. Even now, he sleeps in a recliner since he can’t rest on his left side or his stomach. Also, he moves slower these days because it’s hard for him to breathe. In addition to all of this, the depression that resulted is understandable.

Still, he does what he can, even helping friends collect scrap to redeem for extra spending money. He has even offered to come and help Wilma here at the office!

Anthony recently closed his claim, so we are pleased to have negotiated a settlement (with the BWC) that Anthony’s pleased with. He still says he’ll come help Wilma, so who knows, maybe one day you’ll hear him answering phones for her when you call in!