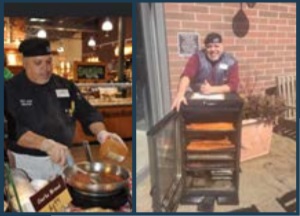 We are blessed to represent people who’ve moved to the United States from all over the world: Vietnam, Morocco, Canada, Nepal, India … even That State Up North! They all have fascinating stories of moving here for better work and better lives. America is still a land of opportunity.

We have several folks from South America and Mexico, including Jesus Sandoval. Jesus came to us in 2016 after suffering two injuries at a large grocery chain headquartered in Pennsylvania named after a large national bird (C’mon, you can guess!).

Jesus moved from Mexico as a young man with training as a chef. He did lots of catering events for the grocery chain and also worked a second job at Sears. In 2013, working as a sous-chef, he was running a tray of six plates of food when a customer thought it might be funny to trip him (I wouldn’t be surprised if the customer was influenced by his friend, “Al K. Hall”). The result was no laughing matter. Jesus twisted and reached out, trying to maintain balance of the tray, and herniated discs in his lower back.

He originally tried handling the claim with a union representative, but the company fought his claim and treatment hard, so he called us. Under the care of an Ohio State neurosurgeon, Jesus underwent epidural injections, lots of therapy, and ultimately a fusion involving several levels of his lower back. Years after surgery, he still wears a back brace and has constant pain in his leg and foot, back spasms, and tingling into his toes.

While being treated for his back, Jesus was promoted to running the seafood department of one of the chain’s new, trendy, premier locations. In 2016, he was coming out of the cooler, getting something to help a customer, when he fell on the wet floor with an outstretched left arm. He tore the three tendons comprising his rotator cuff, and yet was called back to do one-armed work at the store! Not long after, he had surgery for the tear. While he was off, the department revenue dropped 40%; obviously, his customers really missed him!

While he still requires treatment for both injuries and lives with considerable pain, his upbeat attitude and quick smile make him a favorite with customers and coworkers. He has left the store with the large bird mascot and now works as head chef at Buca de Beppo. He’s a man who doesn’t let his injuries get him down — he just keeps on going, like the Energizer bunny. We are fortunate to know him, and talking with him always brightens our day.