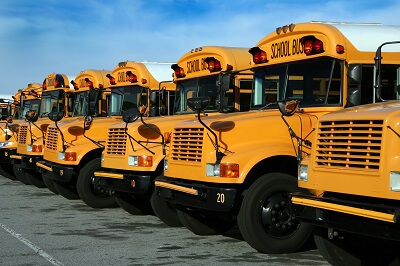 Being a school employee is not without its hazards. Recently, an increasing number of teachers have come to me following attacks by students or injuries they received while restraining students. School bus drivers also are vulnerable to injury. One client’s bus caught fire, and she was injured getting the students off safely. Awkward twisting while working with wheelchairs of disabled students can also cause back injuries.

I’ve represented a lot of Springfield school employees over the years, including a large number of bus drivers. Brenda C. first worked in maintenance when she injured her right knee moving furniture and classroom equipment. The next year, working as a bus driver, she caught a falling student and fell against the bus steps, breaking a finger and tearing her left knee ligaments, which required surgery. A couple of years later, Brenda’s right foot was run over by a student’s wheelchair. This required two surgeries, including a joint fusion in her foot, extensive removal of bone, and a tarsal tunnel release (tarsal tunnel is to the foot what carpal tunnel is to the wrist). She ultimately developed reflex sympathetic dystrophy in her right foot, and she now has to wear shoes two sizes too big because her foot is so sensitive to touch.

Brenda suffered two more injuries afterward, the last happening while power washing a bus. She underwent three surgeries under this claim, including a cervical discectomy, fusion at C5-6, and two right knee surgeries.

Being so limited after experiencing injuries from head to toe (literally!), having ongoing pain, and requiring a lot of medication, Brenda understandably became depressed. She began working at an early age and loved her work with children, but she couldn’t continue. Brenda is now on permanent total disability, so at least she needn’t worry about paying for her ongoing treatment and financial future.

We just love this gal!