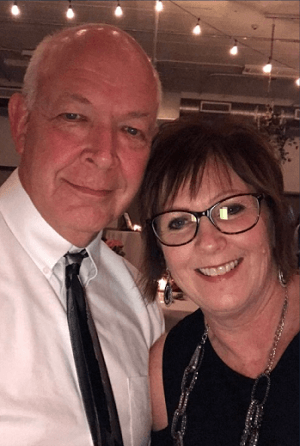 Remember the “What can brown do for you?” ad campaign for UPS a few years ago? (Nerd alert: These ads were an important part of the plot in the “Dimension Space” trilogy by science fiction author Dean Cole.)

I always thought it a rather odd slogan, but Jeff lived it! Jeff is one of several UPS clients we have. He started with them 25 years ago, and he did what the delivery drivers typically do: He got up in the wee hours of the morning to make sure those big brown box trucks are strategically loaded and that they’ve mapped out the most efficient delivery route as they travel along highways, city streets, and rural roads. (Did you know they plan their routes to make as many right turns as possible? The logic being that left turns take more time because drivers have to wait at lights, and they can save substantial fuel and increase the number of deliveries by planning right turns.)

In November 2011, while unloading a semi, a heavy metal pipe fell from a stack of packages and hit Jeff in the front of the leg, causing a significant knee injury. His lateral and medial menisci were torn, as was his PCL. Most of us have heard of the more common ACL or MCL tears; a PCL (posterior cruciate ligament) tear is less common but can result when the knee is bent backward. It’s quite painful and leads to considerable instability.

After his first surgery to repair the tears and lots of therapy, Jeff was given a brace and released to return to work after 10 ½ months. But his problems continued, which is not surprising, as these guys are on their feet a lot, jumping in and out of their trucks to deliver packages.

After working while receiving ongoing treatment, Jeff had his first total knee replacement. After he developed extensive scar tissue, his new knee wouldn’t bend, which led to another surgery. He underwent genicular nerve blocks often and has had a half-dozen or more radiofrequency ablation procedures. He developed a rare reaction to nickel, the metal used in a typical replacement knee joint, which resulted in a revision of his total knee replacement (meaning, they had to do another one). By my count, he’s had eight operations already, not counting the numerous injections, blocks, and aspirations (draining of fluid), including two this year.

All this has transpired over several years. He had a functional capacity test earlier this year confirming he can’t physically do his UPS job.

Meanwhile, what’s brown done for him? Well, they’ve fought him on treatment, tests, and surgeries. They’ve contested his workers’ compensation benefits. They’ve sent investigators to see if they could video him doing stuff his doctors say he can’t do. They haven’t won — he has severe limitations that are obvious. He has a wonderfully supportive wife of 39 years, four children, 10 grandchildren, and neighbors who pitch in to help do the things around the house he can’t.

He’s a good man, doing his best to cope with something he didn’t ask for. We’re still in the midst of his claim, but we admire him and wanted you to meet him.