Can I be Fired For Filing a Workers’ Compensation Claim in Ohio?

In Ohio, employment is “at-will”. This means that employment may be terminated by the employer at any time for any cause. Since this is a judicially created doctrine (i.e., created by Ohio courts through decisions issued in lawsuits rather than created by the state legislature through passage of a statute), it is trumped when it goes against a public policy established by the General Assembly.

The Ohio Revised Code provides such a public policy exception in the laws governing workers’ compensation claims. Specifically, employers are prohibited from discharging, demoting, reassigning or taking any action against an employee because the employee filed a claim or instituted, pursued, or testified, in any proceeding under the Workers’ Compensation Act.

Free E-book: The Worker’s Guide To Injury Compensation In Ohio

What are the Remedies if You're Fired for Filing a Claim? 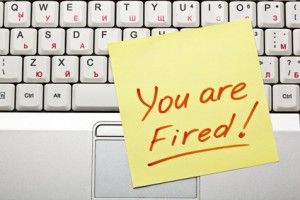 If you have been improperly fired, you are eligible for reinstatement with back pay. The back pay is offset by earnings subsequent to the firing and payments you may have received for temporary total disability, wage loss or unemployment compensation. If you weren’t fired but were demoted, reassigned or other punitive action was taken against you, you may recover lost wages offset by the same earnings mentioned above.

Retaliatory discharge situations are sometimes not as clear cut as they seem. Rarely is an employer stupid enough to say “I’m firing you for filing that claim!” Rather, the employer bent on firing someone for pursuing a claim will try to find some other plausible reason for the termination. They may say you didn’t play well with others, you were chronically late, you liked to fall asleep on the job or didn’t follow an obscure work-rule (one nobody else is expected to follow either). In other words, if the employer wants to fire you, they will try hard to do so.

Does this mean you should be afraid to file a claim if you are injured on the job? Well, you may still be somewhat fearful….but you are not at the mercy of the unscrupulous employer. Remember that most employers don’t fire or take other retaliatory action against their employees. Plus, you can have a legitimate claim that will continue on even if you are fired. Particularly for serious injuries that will require lengthy, expensive and ongoing medical treatment, the protection that the claim itself provides may be greater than the security provided by a particular job. You have many other legal protections that may be available to you if you find yourself handed the pink slip. You may have protection through your union, a case for unemployment compensation and even a lawsuit against your employer for defamation, breach of contract, intentional infliction of emotional distress and/or promissory estoppel, FMLA violations, etc. These are situations where it may be best to seek legal counsel.