Does workers’ compensation cover employee slips and falls in ice and snow? 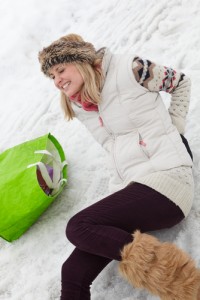 After the winter we’ve had so far, I can now understand why people move to warmer climates – I’ve shoveled enough global warming off my driveway over the past couple months to last me several years, thank you very much!

A common winter scenario in Ohio involving employee slips and falls are injuries that happen in an icy parking lot while walking into work. For example, imagine if you will that Brooke works at a department store at the Mall. She parks her car in the Mall parking lot. As instructed by her employer, she avoids parking in the four rows in the parking lot closest to the store entrance as these are reserved for customers. On her way from her car to the store, Brooke slips on a natural accumulation of ice and injures her knee.

Is This a Valid Workers’ Compensation Claim?

She hadn’t yet clocked in and her employer wasn’t responsible for clearing the ice from the parking lot.

Is the Mall responsible for covering the cost of her medical treatment and lost wages since it’s their parking lot? Is Brooke responsible for not practicing “safe walking”?

The "Going and Coming" Rule

The rationale is that the requisite causal connection between the injury and the employment doesn’t exist. Informally, this is known as the “going and coming” rule. While, as a general rule, an injury sustained on the premises of the employer is compensable, Brooke’s injury was not sustained on her employer’s premises as the parking lot was owned and maintained by the Mall.

So, Does Brooke Have a Workers’ Comp Claim or Not?

It turns out these are the exact facts taken from a case in Mentor Ohio where the court concluded that Brooke did have a valid workers’ compensation claim. While Brooke’s employer understandably argued that it had no control over the condition of the parking lot and that the Mall should, therefore, be responsible, the Court sided with Brooke.

Under an exception to the going and coming rule, the Court noted that an injury may present a valid workers’ compensation claim if it occurred within the “zone of employment.” A critical inquiry is whether the employer had control over the area where the accident occurred. Although the Mall controlled the parking lot, the Court determined that the employer exercised a great deal of control over Brooke and the area of the parking lot where she parked and fell.

Parking lot slip and fall cases in workers’ compensation claims are very fact specific. In a case similar to Brooke’s, the Court held the employer not liable as the employee could park wherever she liked in the Mall lot. She parked further away and was injured walking across the parking lot to her employer’s store. There, the Court concluded that the employee was not in the “zone of employment” and so her injury wasn’t work-related.

Employers generally contest these cases as any claim can affect its workers’ compensation rates and because there often is a legitimate basis to argue that someone other than the employer should be responsible for these ice and snow injuries. Employers will probably have representation in these disputes and I believe it makes sense for an injured employee to get an opinion from at least one attorney familiar with workers’ compensation issues on whether the injury is or isn’t likely to be covered by workers’ compensation. Such injuries can be serious and their impact life-long. Contact our Upper Arlington law office by calling (614) 334-4649 to discuss your accident and to see how our team can help.