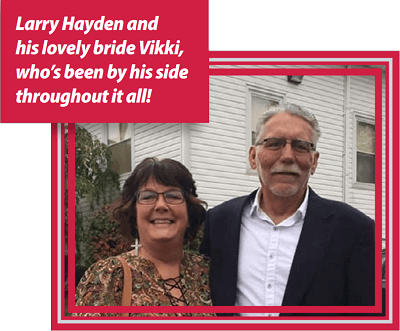 I guess it never dawned on me before, but I’ve had lots of school employees in my family. Charles, my father-in-law, had a second job (he worked at Caterpillar during the day) as a custodian at the high school in Morton, Illinois. My brother-in-law, Steve, just retired after 35 years of doing maintenance work at the same school. My sister, Kathy, worked as a secretary and assistant librarian at an elementary school in Fort Smith, Arkansas, and two of my daughters-in-law (Holly and Britney) taught pre-school and special needs students, respectively.

I’ve also represented my fair share of teachers, school bus drivers, and maintenance and custodial workers. One thing about working in and around schools (as with many other jobs) is that there’s ample opportunity to get hurt! Slipping on playgrounds or floors, moving heavy items, finding broken chairs the hard way, and recently, assaults by students … as Gilda Radner used to say, “It’s always something!”

One veteran of the chalkboard cathedrals is Larry Hayden. After working several years as a railroad brakeman following high school, Larry decided it was time to “clean up his act”! He was hired as a custodian at Springfield City School District and rose to become head custodian over his 22 years.

Most of us who’ve held the title “manager” or “head” of anything know the position not only involves directing others but also often means doing the jobs others won’t do. Larry was in charge of a 75,000-squarefoot building and grounds. He scrubbed, buffed, mowed, plowed, cleaned, and vacuumed. He maintained the boilers and made repairs. He ordered supplies and supervised others.

He first hurt his back lifting a 4x8 slate chalkboard. When therapy and nerve blocks didn’t ease the pain of the herniated disc, he underwent his first surgery and returned to work a couple months later at the start of the school year. The back and leg pain returned, the herniation recurred, and his second surgery soon followed. After this, the pain never went away, but he went back to work.

Less than a year later, he slipped on ice in the school parking lot and landed on his knee. This led to two knee surgeries and a promise from his doctor that a knee replacement would be inevitable.

Before the second knee surgery, Larry had his third back surgery. This was a big one, as it entailed fusion, fixation, bone grafts, and decompression. Fortunately, Larry’s surgeon specializes in complicated surgery. Larry got to see him again after his third injury (folding up large cafeteria tables) when he underwent an almost unheard of second fusion involving titanium mesh, complete discectomies, and partial removal of vertebra at several levels. Needless to say, Larry now stands straight as his back has almost no curvature.

After a year of healing, braces, and therapy, Larry wanted to return to work but his doctors said, “No way!” Given his ongoing pain, limited mobility, and lack of motion, the Industrial Commission agreed this wasn’t possible and granted permanent total disability.

Larry now spends his time with his lovely bride, Vikki. They’re involved with their church and like to fish, weather permitting. He’s still ornery and always greets people with a big smile. I’m grateful to know him!