Carpal Tunnel: What It Is and How It's Covered By Ohio Workers' Compensation

When thinking about potential injuries that can lead to time off work, we often think of serious accidents resulting in broken bones, disc herniations, or torn ligaments. 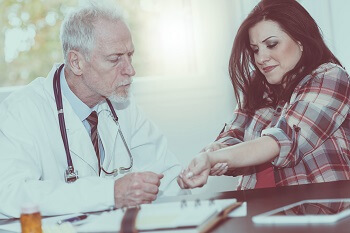 However, an increasing number of Ohio workers’ compensation claims in recent years have resulted from repetitive activities involving hands and wrists.

I first noticed this when grocery stores started using scanners in their check-out lines thirty years ago. As cashiers repetitively scanned items over their shifts, they experienced tingling and numbness in their hands. Longaberger basket weavers and assembly line workers frequently developed these symptoms.

At one of my previous offices, one employee typed for us all day and then moonlighted at a local hospital transcribing physician dictation. After several years of this, she developed very significant carpal tunnel syndrome in both wrists and never recovered despite several surgeries.

Carpal tunnel is a repetitive stress injury that causes inflammation and swelling in the arm, hand, and fingers. It often presents as an intense pain in the lower arm and fingers that dramatically limits movement. As repetitive stress suggests, the injury is brought on through repeated actions.

Although carpal tunnel often arises from desk-related work, it can occur with any repetitive activity involving your arms, wrists, and hands.  For example, casino dealers, assembly line workers, and construction workers using jackhammers may also suffer from carpal tunnel.  Many of my clients have also developed carpal tunnel and other repetitive strain injuries such as tendinitis and epicondylitis [tennis elbow] from regular, repeated use of vibrating tools such as air drills. With others, it’s resulted from the continuous handling of small assembly parts.

Typically, one of the most significant challenges in bringing a workers’ compensation claim for carpal tunnel is showing that your injury occurred at work.

Carpal tunnel is primarily considered an occupational disease, rather than a work-related injury (although it can also be traumatically induced following, say, a broken wrist). Ohio workers’ compensation covers occupational diseases where the employee can establish that the disease results from work. Employees filing Ohio workers’ compensation claims for carpal tunnel must prove they have it and that it resulted from a circumstance at work, rather than something they were doing outside of the job, or a preexisting condition such as diabetes or rheumatoid arthritis.

You can help establish your carpal tunnel claim by keeping proper documentation of how and when your condition developed, and treatment you have sought. Reporting to your doctor about how your symptoms are affected by your work activities can help to verify your claim. EMG findings must confirm the condition, and your doctor will need to opine it resulted from your work.

Carpal tunnel can slowly develop. Under Ohio law, employees generally have two years to bring a workers’ compensation claim for an occupational disease, although this statute of limitations often may be extended.

If your workers’ compensation claim is approved, several treatment options are available. If carpal tunnel is developing, some doctors recommend the use of splints or braces to support and hold your wrist straight and alleviate pressure on your nerves.

If this treatment does not resolve your pain, the next step may be to consider steroid injections into your arms and wrists hoping to reduce inflammation. You may require several doses before you receive a significant positive response. As a last resort, if all else fails, you may need to have surgery to cut your carpal ligament and alleviate pressure on your nerves.

If you are experiencing carpal tunnel symptoms because of your job, you may have workers’ compensation to help you obtain medical treatment for your condition and recover lost wages for time off work. At Monast Law Office, we have a great deal of experience in assisting workers with repetitive stress injuries such as carpal tunnel syndrome, tendinitis, tenosynovitis, and epicondylitis.

Unfortunately, many workers do not know they qualify for compensation for these conditions. They may hear they are “just getting older,” or that workers’ compensation only covers injuries caused by accidents.  At Monast Law Office, we know better.

To discover if you may have a workers’ compensation claim based on your repetitive stress injury and learn what your options may be, contact us at (614) 334-4649.