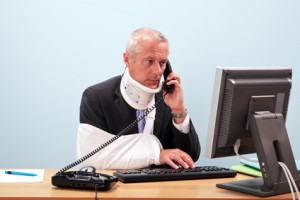 As we have discussed in “Will I Lose Wages if I’m Injured at Work?”, temporary total disability (TTD) compensation is payable to someone whose work injury prohibits him/her from returning to the former position of employment during the time the injury is healing.

It is “temporary” in the sense that the disability isn’t considered permanent (although it may ultimately result in permanent loss of function) and the injured worker has not yet reached maximum medical improvement (meaning, again, that further improvement is still anticipated).

An injury that temporarily prevents a return to the former position of employment may permit other, less strenuous work while the injury is healing.

For example, a plumber may rupture a disc in his back requiring surgery that prohibits him, at least temporarily, from doing all the bending, twisting, and other physical gymnastics his job requires. He’s eligible for TTD while he recovers from surgery as he cannot return to his former position of employment and has not yet reached maximum medical improvement.

But, say, his doctor believes he could do lighter work while he’s recovering, such as supervising other plumbers or even office work answering the phones or scheduling appointments. Employers have incentives to bring injured employees back to work on light duty as it lowers claim costs and the employer (and often the employee) benefits from having experienced employees back at work, even if temporarily in a different capacity.

Ohio permits employers to make written job offers of light duty work within the temporary restrictions identified by the injured workers’ physician of record. (Note: I am using “light duty work” to mean any form of restricted work activity rather than the strict definition found in the Ohio Administrative Code, the Dictionary of Occupational Titles or the Social Security regulations).

The Ohio Revised Code states that temporary total disability compensation is not to be paid when work within the physical capabilities of the employee is provided by the employer or another employer. Employers inevitably file motions seeking termination of temporary total disability benefits if an injured worker refuses a valid light duty job offer.

But, what constitutes a “valid light duty job offer”?  Seemingly yet another phrase designed to guarantee full employment for attorneys, the term is not well defined. Yes, the offer must be made in writing and be within the employee’s restrictions. But what if it would require a different work shift? What if it involves driving 20 minutes longer each day or doesn’t specify the job duties to be performed? Such scenarios have arisen and continue to arise as employers seek termination of temporary total compensation by arguing that an employee refused to return to work “even though we offered him light duty!”

Although Ohio courts generally have not required an injured worker to accept jobs working odd or different hours, jobs further from home or ones imposing new hardships on the worker and his/her family, the results can be as varied as the cases themselves. Slight differences in facts, in the “good faith” of the parties and even in the decision-maker assigned to the case can cause significant differences in outcome.

However, a written job offer of specific employment approved by your physician of record should not be ignored; if an employer knows enough to make such an offer, that employer knows how to move to request temporary total compensation be terminated.

Note: If you face this scenario, I suggest you also read my blog post entitled “What is Voluntary Abandonment of Employment?” as this is, without doubt, another argument your employer will raise at the hearing.