Don’t get me wrong—a growing industry that brings jobs and contributes to the economy of Ohio is a good thing. But, as with any business that snowballs, some craft brewers may be cutting corners where safety is concerned, and their employees are getting injured.

In a surprisingly forward-looking move last fall, the Ohio Bureau of Workers’ Compensation (BWC) announced a partnership with the Occupational Safety and Health Administration (OSHA) and Ohio’s craft brewing associations. The objective is to raise awareness of the risks of injury to brewers and to develop a safety education program to protect workers.

We’ll see what the new Ohio Craft Brewery Alliance can accomplish in the coming years, but meanwhile, let’s look at some dangers inherent in this industry.

Just What Is a Craft Brewery, Anyway? 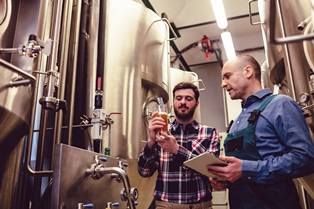 Beer production is certainly not new to Ohio. The Anheuser Busch brewery has been in Columbus since 1968. What is new is the rise of smaller brewers creating unique recipes sold mostly to a local market.

According to the Brewers Association, to be considered a craft brewer, a company cannot produce over six million barrels a year (although most produce far less than this); must be independent; and must use traditional or innovative techniques to brew beer.

So we’re not necessarily talking about a guy brewing beer in his kitchen—a craft brewer can employ a good number of workers. According to the Ohio Craft Brewers Association, there are 300 craft breweries in the state employing over 15,000 workers, and this number increases each year.

It’s Not Just Craft Brewers Who Are at Risk

The kinds of injuries common among brewery workers aren't limited to craft brewers. However, because safety may be less of a priority in a small, fast-growing company, the risks might be higher. Also, craft brewers could be less likely to formally train new employees and to enforce safety rules.

Because workers deal with hot liquids, pressurized tanks, wet floors, forklifts, and heavy loads, brewing is considered a highly hazardous work environment. Workers in a brewery of any size are at risk of suffering these kinds of injuries:

If you're injured on the job in a brewery—at Anheuser Busch or a small craft brewer—you may file for workers’ compensation.

Ohio workers’ comp law requires that any company with at least one employee must carry workers’ comp insurance. So no matter what size brewery you work for, if you're injured on the job or become ill due to workplace exposure and cannot work, you may be eligible for workers’ comp benefits.

Request a free download of my book, The Worker’s Guide to Injury Compensation in Ohio to learn more. If you have any problems applying or getting your application approved, contact me to see if I can help. Just because your employer is in a trendy, non-traditional industry doesn't mean it isn't required to carry good old-fashioned workers’ comp insurance!