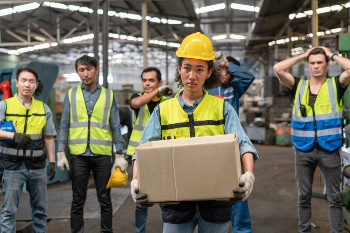 Not surprisingly, a recent study from NIOSH (the National Institute for Occupational Safety and Health) confirms that temporary workers are injured more often and more seriously than permanent employees, especially in certain industries. This study is particularly interesting because it was conducted in Ohio over a 13-year period.

As we are in the season when companies often bring on more temp workers to meet labor demands, it seems like a good time to remind people that most temporary workers are covered by Ohio workers’ compensation and should file a claim if they are injured on the job.

What the NIOSH Study Concluded About Temp Workers

The study looked at over 1.3 million workers’ comp claims in Ohio, including 45,000 claims from temporary workers, and found that temp workers had higher overall injury rates than permanent workers when performing comparable jobs. The highest rates of injury were found in the agriculture, extraction, and construction industries and most often involved contact with objects and exposure to harmful substances.

Because workers’ comp is a no-fault insurance program, a worker’s lack of experience should not affect their being approved for workers’ comp benefits. As long as the worker was on the clock at the time of the accident, their medical bills and lost wages should be covered. It doesn’t matter if the worker made a mistake or failed to follow a safety protocol. If they were injured during the scope and course of employment, they should be covered.

It also doesn’t matter if the worker was only hired on a temporary basis—during the holiday season, for example. As long as the worker is not categorized as an independent contractor, they are eligible for Ohio workers’ comp benefits.

Common Temp Jobs in Ohio During the Holidays

Many employers, from retailers to builders, add employees on a temporary basis before and during the holidays. As the NIOSH study revealed, many of these workers are brought on with little or no experience and are often not adequately trained to avoid accidents and injuries. Typical temp jobs around Columbus include positions in:

Many temporary workers don’t even think of filing a claim if they are injured at work, but they should understand that they may receive coverage despite being short-term employees.

Get Help From Monast Law Office

With over 30 years of experience as a workers' comp attorney in Ohio, I have helped many temporary and part-time workers get the compensation they were entitled to after a workplace accident. If you are getting pushback from a seasonal employer, contact Monast Law Office to discover how we can help. Learn more by requesting a free copy of our book, The Worker's Guide to Injury Compensation in Ohio, then fill out our online contact form or call our Upper Arlington office at 614-334-4649 to get started.