As an airline passenger, how much thought have you given to what pilots and flight attendants do between your flight and their next trip? If you're like most people, you probably haven't thought about it at all. After your flight, you're on to your destination or the next leg of your journey. However, the life of a flight crew member is about more than just each flight they work. Whenever they are away from home—which is most of the week for many employees—they are eating in restaurants, staying in hotels, working out in gyms, and traveling to and from the airport. What I learned when I represented a flight attendant in a workers' comp dispute with an airline is that they are on the clock, so to speak, for most of that time. Because of this, they are also covered by workers' comp if they get into an accident and suffer an injury.

When Flight Crews Are Pursuing Their Employer's Business

My client was staying at the hotel arranged by the airline when she fell out of bed and was knocked unconscious. She suffered a concussion and a herniated disc. Her workers' comp claim was initially denied because the airline claimed she was off duty. They compared her status to a truck driver on a rest break. Unlike truck drivers, however, pilots and flight attendants are never really off the clock when they are on a trip. Even at the hotel between scheduled flights, they could be called 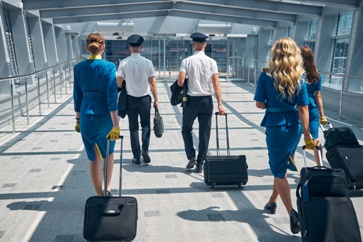 in to fill another shift. Truck drivers, on the other hand, cannot be called in when they are on a required rest break—therefore, they are off the clock. In the case of my client, I was able to differentiate her status from that of a truck driver to get approval for the benefits she deserved.

Because flight crews are on duty from their report time until they are released when they return to their home base, they are considered to be pursuing their employer's business during this entire time. The only potential exceptions would be if they are on a personal "errand," such as going to a bar or working out in a gym during this time.

While my client's accident was a bit unusual—hitting her head on the nightstand and being knocked out is not an everyday occurrence—there are plenty of more common accidents that can happen to traveling airline employees. Potentially serious accidents include:

Of course, flight crews—particularly flight attendants—suffer all kinds of injuries during flights as well. Falling luggage, unruly passengers, wayward beverage carts, turbulence, and other hazards can leave them seriously injured. These kinds of claims are generally easier to pursue, however, since they clearly happen on duty.

Whether you are a member of a flight crew or an airport worker, you can count on Monast Law Office to protect your right to workers' comp benefits when you are injured on the job. As long as your company is based in Ohio, you have a right to Ohio workers' comp. Even if you are unsure of your coverage, contact my office, and we would be happy to help you out.