Injured While Working at Home? You May–Or May Not–Be Covered by Ohio Workers’ Compensation 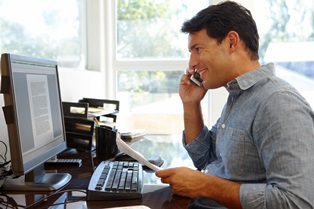 In Ohio, full-time telecommuters comprise almost four percent of the total workforce. With that many people doing their jobs at home, work-related injuries are becoming more common.

When you're injured at home performing your work duties, will you be covered by workers’ comp? Yes...sometimes.

First Question to Consider: Are You an Independent Contractor?

If you're a freelancer or independent contractor, you're not covered by the Ohio workers’ compensation program unless you obtain coverage on yourself through the BWC. This is because you're self-employed and have no employer who would carry the insurance. For example, as an employer myself, I have to provide coverage for my employees. I also elected to obtain coverage for me. The coverage isn't automatic for me as the practice owner (even though I have an actual office separate from my home), but it's cheap insurance to have. Every self-employed person should have workers' comp coverage on themselves.

If you're working for a company that has control over your work product, it’s possible you're misclassified as an independent contractor. You actually may be considered an employee, regardless of the label they've given you. Sort out this designation before you experience an injury.

Next Question: Where's Your Employer Located?

Another important consideration is the location of your employer. Even if you live and work in Ohio, if your employer is based in another state, you'll be subject to that state’s workers’ compensation scheme if your employer has elected coverage under the laws of that state. Often, this is covered in your employment contract–however, even that may not be the last word!

Likewise, if your employer is based in Ohio, but you live and work in another state, you'll be covered under Ohio workers’ comp.

As an Ohio workers’ compensation attorney, I can help with the latter claim but cannot help Ohio residents who work for out-of-state companies whose coverage is through another state.

What You Need to Prove

The tricky part about these claims is you'll only be covered for injuries you sustain while performing required job duties at home. Drawing the line between when you're “at work” and when you're off duty is difficult when you have a home-based office. Your employer may have established your work hours and work location to limit when you're covered.

Even if you don’t have such an agreement, you must provide:

With no other witnesses, the Ohio Bureau of Workers’ Compensation and the Industrial Commission must rely on these pieces of evidence. Working with an experienced Ohio workers’ comp attorney could increase your chances of success.

Given their jobs, the majority of online and remote workers are at a desk or on computers. So the injuries they suffer are similar to those of office workers.

As a telecommuter, you may also be exempt from the “coming and going” rule, which says that workers aren't generally covered on their way to or from the job. If you usually work from home but have to visit the office for a monthly meeting, for example, your travel may be considered in the course and scope of employment. A car accident on the way to and from the meeting or a slip in the company parking lot fall should then be compensable.

If you work from home and suffer a severe injury that prevents you from doing your job, don't risk being denied the workers’ comp benefits you deserve. Contact me, Attorney Jim Monast, to discover if I can help you present a strong case for benefits. Being a telecommuter shouldn't exclude you from the benefits of employment in Ohio.