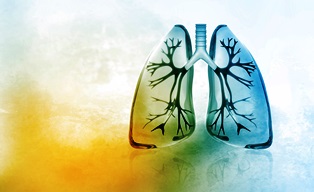 These diseases are often caused by cigarette smoking, but also occur in non-smokers, particularly adults who work in specific industries.

When respiratory disease makes breathing so complicated that an employee can't perform simple physical tasks, he or she may qualify for workers' compensation benefits—if it's proven the disease was caused by workplace conditions and not by smoking, allergies, or some other factor.

Asthma is a disease in which the airways become inflamed and lead to wheezing, breathlessness, chest tightness, and coughing. A sufferer may have infrequent attacks, have symptoms only when exposed to a trigger, or have symptoms all the time. The severity of the disease can range from a minor inconvenience to a life-threatening condition.

Asthma can be caused by exercise or exertion, exposure to allergens such as pollen, mold spores, or pet dander, or by harmful workplace substances. Occupational asthma affects two million people in the U.S. and is often the result of exposure to the following:

If your asthma prevents you from doing your job and is caused by workplace exposure, you may qualify for Ohio workers’ compensation benefits. However, it may be difficult to prove the connection, particularly if you suffer from allergies or smoke.

Occupational COPD May Prevent You From Working

While often thought of as a smoker’s disease, chronic obstructive pulmonary disease can also be caused by workplace exposure to certain substances.

According to the National Institute for Occupational Safety and Health (NIOSH), approximately 15 percent of the 10 million diagnosed cases of COPD in the U.S. are attributable to occupational exposure. Coal mine dust and crystalline silica, used in making glass, ceramics, and bricks, cause COPD, but other substances may also contribute.

Workers in these industries are at an increased risk of developing COPD:

COPD is caused by long-term exposure to particulate matter or irritating gases, but there may be no symptoms until a person's lungs are damaged, so a worker may not know they're exposed until it's too late.

Emphysema and chronic bronchitis are the main contributors to COPD and symptoms may include:

People with COPD may experience periods of worsening symptoms, known as exacerbations, during which they're unable to perform ordinary tasks. COPD complications include heart problems, lung cancer, high blood pressure, and depression. A person with COPD may find it exceedingly difficult to work.

NIOSH estimates that 20 million workers are exposed to substances in the workplace that can cause asthma or COPD. If your respiratory disorder developed because of exposure to harmful substances on the job, you might be covered by workers’ compensation for the medical care you need and your time away from work.

This might not be an easy claim to make, particularly if you're a smoker, but with assistance from Monast Law Office, you can get the benefits you deserve. If you're being made to feel like you're trying to "cheat the system" because you're applying for benefits for asthma or COPD, call our office to discover how we can help. You deserve to be taken seriously, and I can make sure you are!